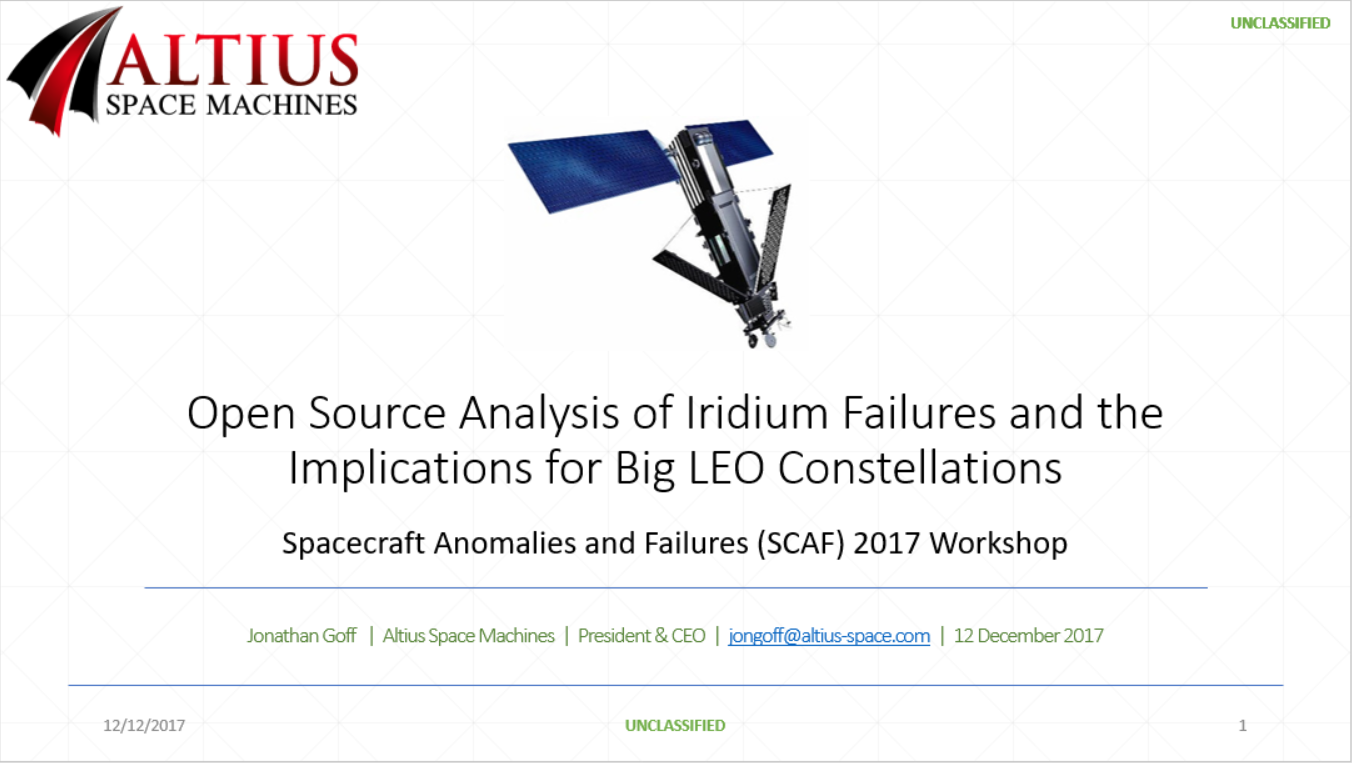 It has been a while since we last posted updates on the company blog, and we wanted to start giving more regular updates on our progress. Part of why we’ve been so quiet lately is that we’ve been actively developing technologies and a business plan for a “BullDog™” Low-Earth Orbit Satellite Servicing offering. We’ll provide more details on that in future blog posts, but today we wanted to share a presentation we were invited to give at the Spacecraft Anomalies and Failures workshop last December (the picture below is a link to a copy of the presentation):

Genesis of This Study
By way of background, one of the main capabilities we’re trying to provide with BullDog is a way for LEO constellation operators to safely and reliably deorbit satellites that fail before they can perform their own post-mission disposal maneuvers. Over the past several years, concerns over the danger that orbital space debris poses to the sustainability of LEO operations have led to the creation of international guidelines that recommend LEO spacecraft be lowered to orbits that will naturally decay in less than 25 years after the end of their mission. As part of the FCC licensing process for satellite operators, they have to provide the FCC with their plan for complying with these 25 year post-mission disposal (PMD) guidelines. Typically for satellites operating at altitudes too high to naturally decay within 25 years, this means including a deorbit propulsion system, reserving enough propellant for that system to do the planned orbit lowering burn, and building in enough redundancy to make sure the deorbit propulsion solution has a high probability of lasting long enough to perform the PMD maneuvers.

But in real life, “Plan A” doesn’t always work, and for our business planning purposes, we needed to estimate how often Plan A is likely to fail for future constellations. While there are a lot of numbers out there that talk about industry-wide PMD reliability, we had heard from at least one of our potential customers that these numbers might be suspect, and he recommended we do our own analysis. To do this analysis, we decided to focus on the Iridium satellite-telephone constellation as it is the constellation closest in size and concept to the various proposed Big LEO constellations, and because as a publicly traded company there was a lot of openly available information.

After doing our initial analysis, we reached out to several industry subject matter experts to get feedback on our analysis and results. One of the experts we were referred to was Darren McKnight of Integrity Applications, who regularly runs a workshop on spacecraft analysis and failures. Darren suggested our study might make a good presentation for the workshop, so we were invited to present our study and its implications during the unclassified portion of the workshop that was held in Chantilly in mid-December 2017.

For any of you involved in spacecraft development or operations (scientific, commercial, civil, or military), this was a fascinating workshop. We were only able to attend the unclassified portion, but it was an extremely interesting day full of presentations about various anomalies, how groups investigated them, what they think happened, and lessons learned. Also there were several great presentations on industry and government efforts to better characterize space weather hazards, MMOD, and using Space Situational Awareness tools to study anomalies. And best of all, you were in a room full of talented space experts giving feedback, asking interesting questions, etc. It was a lot of fun being able to present to the group and to get suggestions for follow-on research, and to get feedback on our recommendations for LEO constellation operators.

Important Caveat
Before I get to far into our methodology and what we learned, I’d like to first add a caveat that this is in no way an attempt to make Iridium look bad. Iridium received its launch permits before the 25 year PMD rule had been finalized, and has been doing its best to voluntarily comply with those guidelines even though they weren’t explicitly required to. Iridium managed to survive its way through the original dot.com bubble burst and through having to maintain satellite telecoms capabilities long enough for their second generation constellation to finally start launching. It’s not everyone who can keep the wheels on the bus 19 years into a planned 8 year mission, especially with their first-generation attempt at mass-produced LEO spacecraft. So I want to be clear the point of this exercise is to learn lessons for future operators, not to second-guess how Iridium did things.

Methodology and Results
As described in the presentation above, which was written to be as easy to read after-the-fact as possible, we used open-source data from Wikipedia and various new articles to determine the publicly reported status of each satellite at the time of the first Iridium Next launch in January 2017. The key question we were trying to answer was: “If this satellite had been operating at the same altitude as the planed Big LEO constellations (i.e. >1000km), would the satellite still be able to comply with the 25yr PMD guidelines?” We tried to take a conservative approach, where if there was any doubt, we assumed the satellite was capable of complying with the guidelines, and we also did not count the failure that was caused by the Kosmos collision.

The details are provided in presentation, including several pages of references you can dig into if you’re interested, but the upshot was that as of January 2017, 20 of the 95 first generation Iridium satellites (21%) had failed in a way that would have left them unable to comply with the 25yr PMD requirements had they occurred at the planned Big LEO constellation altitudes. Of these 20 failed satellites, 15 of them were tumbling and no longer controllable, and 5 failed in a way that they were able to deorbit in a 25yr compliant manner because of the lower constellation operating altitude (780km vs >1000km for planned Big LEO constellations), but which would have failed PMD operations had they occurred at a higher altitude.

To give you an idea of what this failure rate would imply for proposed Big LEO constellations, 21% of the approximately 8,000-10,000 currently proposed Big LEO constellation spacecraft would imply the creation of 1600-2000 new pieces of large space debris in LEO over the next 10 years, ignoring debris created by secondary collisions between these objects and background objects. That would more than double the number of debris objects in LEO with mass >100kg. And most of these pieces would be left in extremely long-lived orbits, where they would be there for hundreds of years or more.

Recommendations
While some may be quick to dismiss these results as overly conservative, because of how long the Iridium satellites have had to operate beyond their planned operating lifetimes, it’s important to remember that:

While none of these prove that future Big LEO satellites are going have as many PMD challenges as Iridium had, they do suggest that achieving an acceptably high rate of post-mission disposal will require serious effort. Fortunately, the Big LEO constellation operators appear to be doing their best to make sure their PMD “Plan A” is as reliable as possible. This is a good first step, but due to the consequences of failure if Plan A isn’t good enough, we strongly recommend that all satellite operators consider “What is your Plan B?”

For the last part of the presentation, we identify several potential post-mission disposal Plan B options, including both backup deorbit propulsion solutions (deorbit motors, tethers, drag sails, etc), and deorbit tug solutions. We also discussed low-cost, low-SWAP cooperative servicing aids that are being developed to make spacecraft easier to grapple and interface with in case they ever need to be towed or serviced. The upshot is that between our lightweight DogTag™ cooperative grappling interface, and Goddard’s cooperative servicing decals and Cooperative Servicing Valves, the delta-cost to a satellite to make it much cheaper to service or deorbit is <<1kg and <$2000.

As the Goddard Satellite Servicing team like to say, when it comes to making your satellite easier to service: “Don’t Do Nothing.”